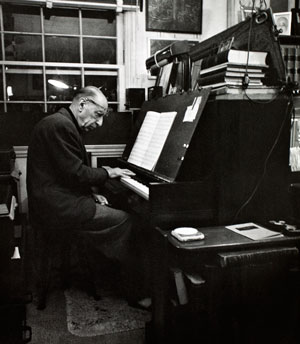 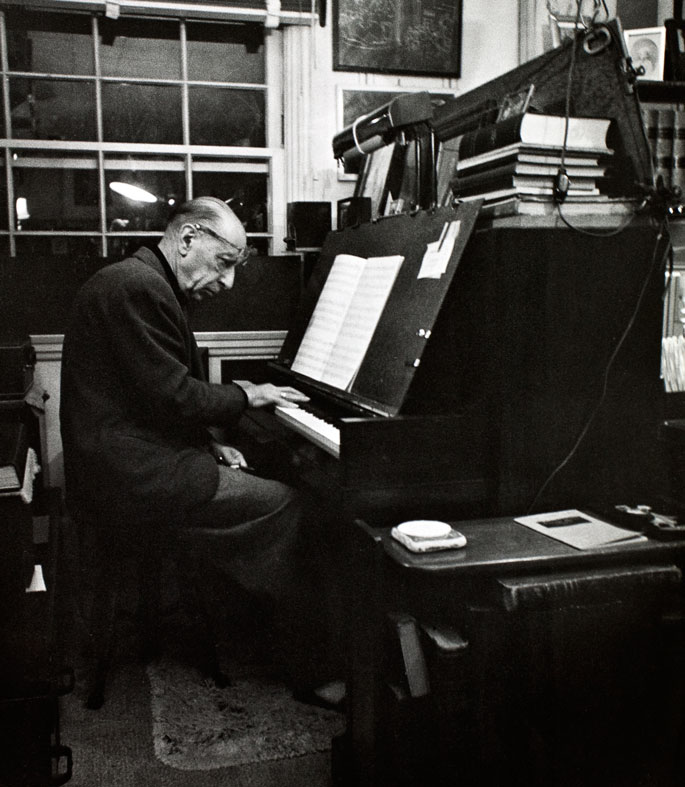 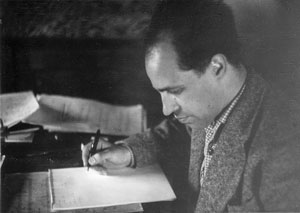 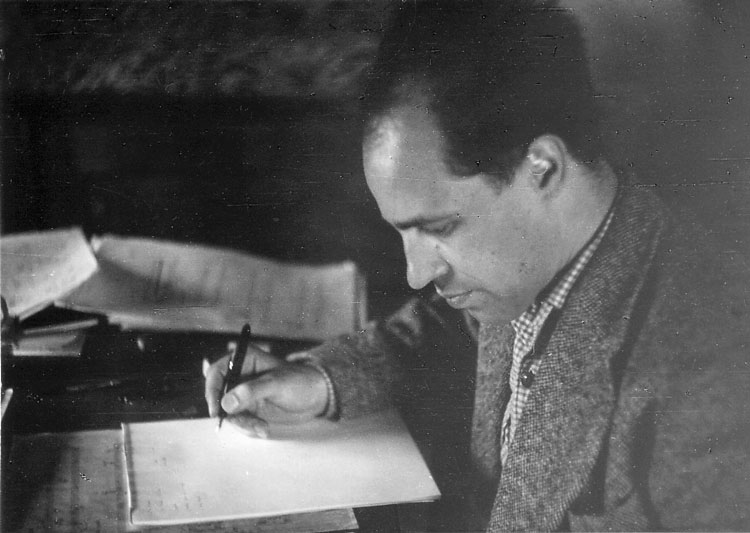 'My freedom thus consists in my moving about within the narrow frame that I have assigned myself for each one of my undertakings.' Thus Igor Stravinsky, writing in Poetics of Music, his Harvard lecture series of 1938:

'I shall go even further: my freedom will be so much the greater and more meaningful the more narrowly I limit my field of action and the more I surround myself with obstacles. [...] The more constraints one imposes, the more one frees oneself of the chains that shackle the spirit.' [1]

Stravinsky's thoughts on the prerequisites of creativity appeared on the French book market in 1945. They read like a covert programme for Boulez's Douze Notations pour piano. The idea of solving compositional problems within a clearly delimited field of action formed the starting point of his piano collection, which Boulez composed at the end of the same year. First, as regards instrumentation, the 20-year-old composer limited himself to the instrument he knew best, the piano, for which he wrote practically every work from his brief years of study. Then he took the number 12 as his guide to restrict his creative field of action: a 12-note row forms the basis of 12 short piano pieces, each of which is 12 bars long.

The productive forces unleashed by this radical self-restriction are impressively demonstrated in the finished composition. In his creative encounter with self-imposed limits, Boulez succeeded in producing music of enormous gestural power and variety of expression. Particularly striking is his at once free and original handling of the 12-note method and the rhythmic procedures he had learned from ​

Pierre Boulez and Olivier Messiaen in November 1988, at the rehearsals for the première of Messiaen's Un vitrail et des oiseaux(Photograph: Ralph Fassey)Olivier Messiaen It is hard to overstate the impact of Olivier Messiaen (1908–1992) as an educator and composition teacher. This organist and composer was active at the Paris Conservatoire for almost four decades, during which he left a mark on several generations of musicians. In 1941 he took charge of a class in harmony, and he taught analysis from 1947 on. In 1966 he was finally appointed professor of composition, a position he held until 1978. Among the composers who studied with him were Iannis Xenakis, Karlheinz Stockhausen, Gérard Grisey, Tristan Murail, George Benjamin and of course Pierre Boulez, the first of his pupils to make a name for himself. Speaking of Boulez in retrospect, Messiaen said: 'He was so intelligent and so musical that he didn't need a teacher. I'm convinced he would have done extraordinary things without any help at all.' [1]  Notes[1] Theo Hirsbrunner, Olivier Messiaen: Leben und Werk (Laaber: Laaber, 1988), p. 50.

. By rigorously restricting his field of action, he was able to explore the techniques he had assimilated within a manageable space and used them to develop a musical language all of his own.

Notation 7 is an impressive example of how to work with extremely reduced musical material (see Figs. 3 and 4 and

interactive score of Notation 7 in the section Inside the score on this website). The entire piece is based on three building blocks that Boulez obtained from segments of the basic row:

B) an accented iambic cry of lamentation on the pitches c#2-g1 (notes 9 and 10), played exactly seven times (!) by the right hand in the course of the piece;

C) a series of expressive melodic gestures in the right hand, alternating with the cry of lamentation and adding the missing notes of the row, i.e. notes 1 through 6.

The harmonic and melodic shape of the ostinato accompaniment layer and the accented cry of lamentation remain constant throughout the piece. However, the melodic gestures, beginning with the two-note figure a♭2-b♭1 in measure 2, change. They grow increasingly long, expand inside the tonal space and become more and more ornamental toward the end of the piece. Two unchanging building blocks (A and B) thus confront one variable building block (C). 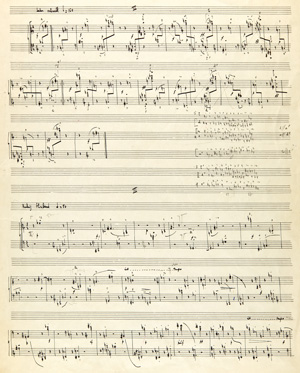 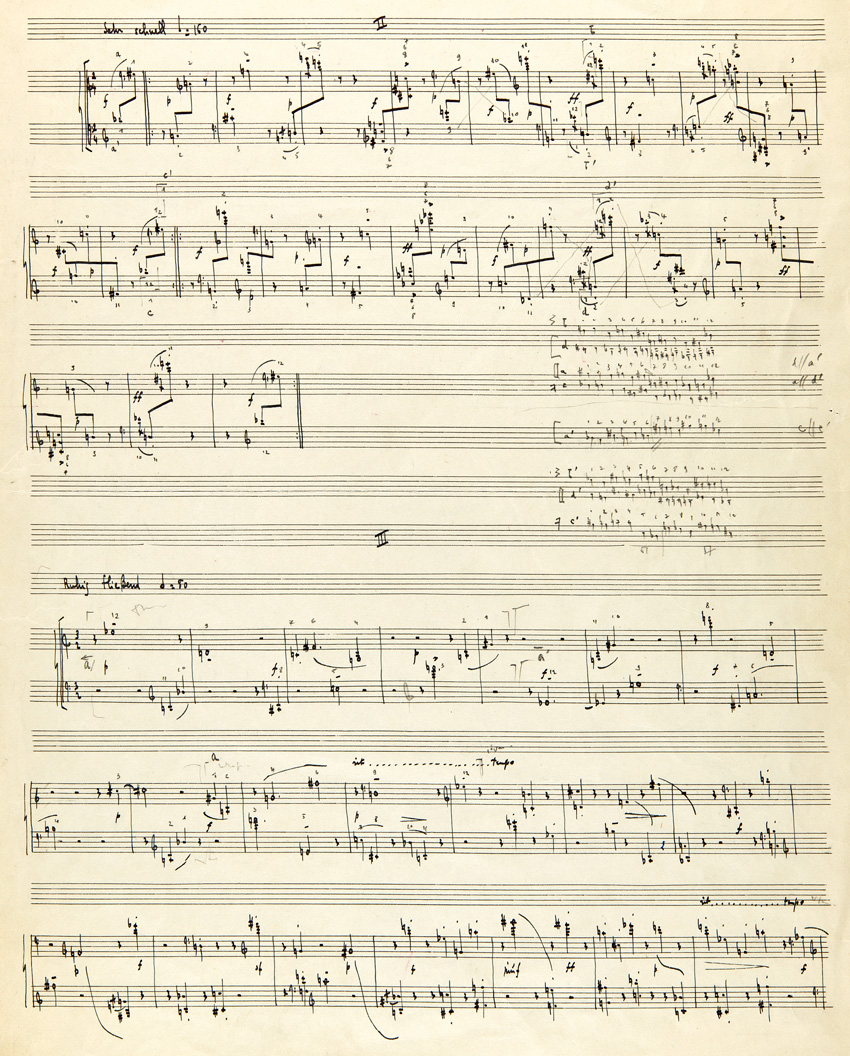 But the two fixed building blocks also harbour an element of surprise. Though unchanging in pitch and shape, they vary in duration. The 5ths and 4ths of the slow ostinato layer always occur at different and unpredictable lengths (between eight and 31 16th-notes/semiquavers). Similarly, the second note of the cry of lamentation changes duration at each occurrence. The object of this compositional game with irregular compression or expansion is to enliven the rhythm of the fabric and to frustrate the listener's expectations. Whereas the fixed harmonic and melodic shape suggests exact repetition, this expectation is thwarted by the variable duration.

Boulez works with another self-imposed restriction in Notation 7, namely, on the level of the tonal material. The notes of the series on which the piece is based are always heard in the same octave register, e.g. the pitch C-sharp always occurs as c#2. The only departure from this rule is found in measure 8. Here the pitch A-flat, normally heard as a♭2, appears as a♭3, forming the peak pitch of the melody. In all likelihood this manner of fixing the register was inspired by the music of Anton Webern: the opening movement of Webern's Symphony op. 21, which Boulez heard in concert for the first time in early December 1945 and may already have analysed with ​ 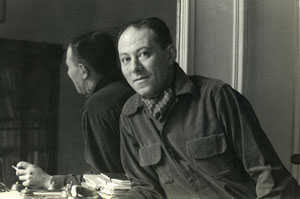 René LeibowitzThe composer René Leibowitz (1913–1972) was probably the most important champion and mediator of the music of the Schoenberg circle in post-war France. Jewish by birth, he went underground in southern France and Paris during the German occupation. He tirelessly championed the music of Arnold Schoenberg and his pupils Alban Berg and Anton Webern, not only as a conductor and a teacher, but also in his writings. During the occupation he wrote the first book in French on the Viennese School: Schoenberg et son école (Paris, 1947). It was immediately followed by Qu'est-ce que la musique de douze sons? (Liège, 1948) and Introduction à la musique de douze sons (Paris, 1949).

A journeyman composition in the section 'History and context'.)

Another possible point of reference is Webern's two-voice mirror canon from the second movement of his Variations for piano op. 27. As in the opening movement of the Symphony, it fixes the registers of the notes, although not quite as rigorously. Unlike the Symphony, however, we cannot say for sure whether Boulez already knew Webern’s work when he came to compose his Notations. 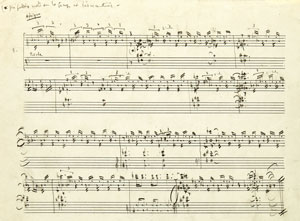 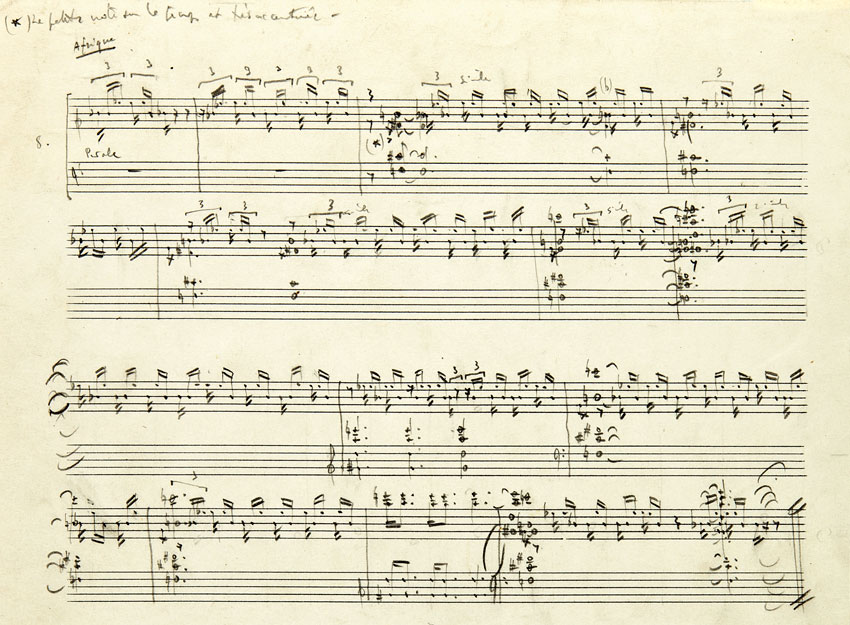 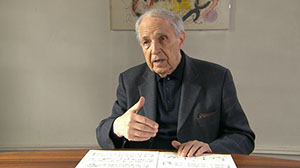 Pierre Boulez on the connections with African music in Notation 8.

Pierre Boulez on the connections with African music in Notation 8.Non-European points of reference

Notation 7 does more than display Boulez's creative encounter with Webern. In his video introduction to the interactive score, he draws attention to the piece's connections with non-European music. This area of influence, though barely discussed in the Boulez literature until recently, cannot be underestimated. In the final phase of his studies the young composer took a deep interest in the music of other cultures. He first encountered Balinese music in Messiaen's harmony class in early 1945. Later Boulez said that he was 'especially fascinated by the strange sound of this music, the quality of the sounds and their resonance, the speed of the playing and the manner of thinking in long spans of time'.[2] At the suggestion of ​

Yvette GrimaudYvette GrimaudAn early pupil of Olivier Messiaen, Yvette Grimaud (b. 1920) was one of Boulez's most important acquaintances in his student years. By his own admission, it was this pianist and ethnomusicologist who arranged his invitation to Leibowitz's Schoenberg concert in February 1945 and who put him in contact with the record library of Paris's Musée Guimet. Five years his senior, she was also one of the first performers of his music. At a recital on 12 February 1946 she gave the first performances of Douze Notations and the still unpublished Trois Psalmodies pour piano. She was also responsible for the premières of his First Piano Sonata, written in the early part of 1946, and the Second Piano Sonata of the following year.

, who gave the première of Douze Notations, Boulez regularly visited the Musée Guimet, a museum specialising in Asian art with a superb record library.

'Hungry to discover other civilisations and worlds of music, we listened to many records there. [...] For a moment I even considered specialising in musicology – not the study of texts, but ethnomusicological research, in connection with a department at the Musée de l'Homme or the Musée Guimet. It was the only profession that could possibly have interested me. [...] I'd also taught myself to transcribe the recorded music at high speed.' [3]

Another important point of departure was the ethnological collection at the Musée de l'Homme, located today in the Musée du quai Branly. There, in the company of the well-known French ethnomusicologists André Schaeffner and Gilbert Rouget, Boulez studied African music – an interest which, among other things, left a mark on Notation 8.